There are all kinds of shoppers in the world. The kind that spend hours searching online or in the stores for the perfect gift, the kind that goes to one store and, in the course of an hour, gets something for everyone on their list, and then there’s the practical shopper who gets you something you might not necessarily want, but he/she feels you need.

The latter reminds me of one Christmas in particular when I was in high school. It was three days before Christmas and my sisters and I had just finished helping my mom make three batches of fudge, along with a pile of divinity.  We were in the process of tidying up the kitchen when we heard the back door open and close, followed by the sound of my dad’s footsteps.

“Why did you come in the back door?” asked my mom when he appeared.

“I had something to put under the tree,” he replied as he sat down at the kitchen table to take off his boots.

My sisters and I looked at each other and then took off for the family room, where we found the biggest box we had ever seen; it was neatly wrapped in red Santa paper, and was so big, it technically sat in front of the tree, instead of under it.

“Who’s it for?” asked my twin sister.

“Your momma,” said my dad, who had apparently followed us into the room.

I pursed my lips as I stood there scrutinizing the box.  There were several things wrong with this picture.  The first was that my dad didn’t really do presents; he did money.  On Christmas morning, white envelopes addressed to each of us kids would be handed out; twenty dollars apiece – the same as every year.  My mom, would get fifty (I suppose this was because she ranked higher, being his spouse and all).  The money would always be in the form of a check, which meant we would have to rely on someone to drive us to the bank to cash it.  On the rare occasion that my dad would purchase an actual present for my mom, it would be the very best that the gas station down the street had to offer on Christmas Eve.  So, for him to have a present for her three days before Christmas showed that he’d obviously put some thought into it.  But what could it be?

For the next three days, we stared at the ginormous box, speculating amongst

ourselves what was inside it.  I mean, even though my dad had stated that it was for Mom, something that big had to be for the whole family, right?  My mom seemed particularly intrigued, as well as thrilled that it was too big to be a toaster (a present from my dad two Christmases ago).

FINALLY, the blessed morning arrived and my sisters and I gathered around the tree, the anticipation so great, I could hear it crackling in my ear.  After opening our envelopes, we offered my dad an obligatory thank you and then turned our attention to Mom and what had come to be called “the present”.

My mom began to tear gently at the wrapping, taking her time as if she wanted to savor the moment.  After several agonizing seconds, there was no more paper to tear and she opened the lid to that massive box.  A pair of snow tires appeared – followed immediately by a foul odor.  As my sisters and I drew our heads back and away from the stench, we saw that the box the tires had been placed in once contained mutton from the restaurant that sat adjacent to my dad’s repair shop.  Together, the smell of new rubber and rancid meat made for a sickening combination.

“Snow tires…”  My mom hid her obvious disappointment behind a fake smile.

My dad leaned back in his recliner and grinned.  “Those are the best snow tires that money can buy,” he said in a booming voice, the pride of such an achievement evident upon his face.

My sisters and I sat there in both bewilderment and awe of our mom’s gratitude for what had to be, hands down, the worst Christmas present in the history of all Christmas presents—until the smell emanating from the box drove us to the kitchen.

My dad and my older sister have since passed, but that story has been told every Christmas—twenty-nine of them to be exact— and it is told with affection, love…and most of all, laughter. 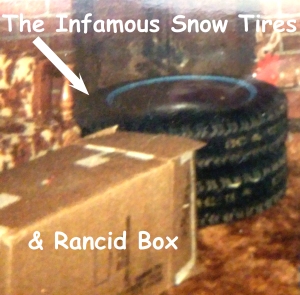 What was the worst/strangest Christmas present you or a family member has ever received? I would love for you to tell me.